A special exhibition entitled “Coming Home—The Open Mind of Patrick Lafcadio Hearn” will be held here with the goal of welcoming the Irish writer Lafcadio Hearn back to his hometown of Dublin, Ireland. Although there is a greater global recognition of his literary accomplishments today, he is still relatively unknown to many of the Irish public. In order to realize this exhibition, the Lafcadio Hearn Memorial Museum of Matsue City in Shimane Prefecture, Japan will loan approximately a dozen items to be displayed abroad for the first time. This will serve as a venue for the public to experience “The Open Mind of Patrick Lafcadio Hearn” through the opportunity of viewing first editions of his major works with displays of majestic artwork and imagery along panels that will trace his life story.

* Introductory lectures about Japanese Culture and workshops for children by Prof. Bon Koizumi, great-grandson of Lafcadio Hearn, and other academics are planned for the opening event.

organized by The Little Museum of Dublin
co-organized by Embassy of Japan in Ireland, Sanin Japan-Ireland Association
sponsored and supported by Dublin City Council, The Ireland Funds, Matsue City, Embassy of Ireland in Japan, The Koizumi Family, Takis Efstathiou, The Hearn Society, The Japan Foundation

The Little Museum of Dublin 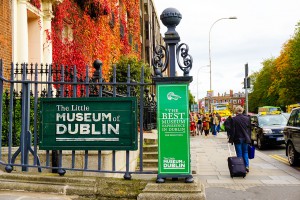